On January 13, 1850, Charlotte E. Ray was born in New York City. She was one of seven children born to Charles Bennett Ray and Charlotte Augusta Ray (nia Burroughs). Her father was a minister, abolitionist and assisted Africans escaping U.S. slavery through passage on the Underground Railroad — a network of people assisting African refugees along the geographic passages that could ultimately lead to freedom.


An ardent student, Ray attended the Institution for the Education of Colored Youth in Washington D.C. In the late 1860s, Ray served as a teacher at a predatory school associated with Howard University. She would later apply for admission to Howard University law school using the name “C.E. Ray”. The school’s law program only admitted men. It is speculated that she used her initials to keep her gender a secret until acceptance.


Ultimately, Ray was admitted to law school and excelled in her studies, reportedly focusing on corporate law. One of her classmates described her as an “apt scholar,” according to the book Notable Black American Women. In 1872, Ray graduated from law school. On April 23, 1872, she was admitted to the bar of the District of Columbia. Her admission marked her as 1) the third woman in U.S. history to be admitted to practice law, 2) the first African-American female attorney in the country, and 3) the first women to be admitted to the D.C. bar and the first woman to be admitted to practice law before its Supreme Court.
By 1873, Ray opened her own law office focusing on the area of law she excelled in, namely, commercial law. She advertised her legal services in newspapers such as the New National Era, a weekly newspaper published by Frederick Douglass — the only paper of its day published and edited by people of African descent. Douglass celebrated Ray’s graduation in his newspaper. In one published article, Douglass reports that Charlotte E. Ray is “the first colored lady in the world to graduate in law.”

While Ray served as a commercial lawyer, there is evidence that she was also active as a trial attorney. She was the first woman to practice and argue a case in the Supreme Court of the District of Columbia. On June 3, 1875, Ray submitted pleadings in the case of Gadley vs. Gadley, No. 4278, in the District of Columbia Supreme Court.  In this case, Ray represented a woman who was petitioning for a divorce against her husband for whom she charged physical domestic abuse and habitual drunkenness. 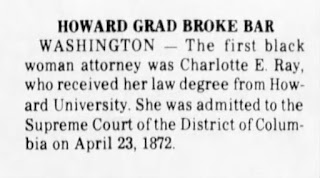 As a solo practitioner who was both a woman and a person of African descent, it was difficult for Ray to get clients due to racism and gender discrimination. In fact, in 1875, only a couple years into Ray’s practice of law, the United States Supreme Court in Minor v. Happersett, 88 U.S. 162, made a decisive decision against women. The question before the Court was whether “since the adoption of the fourteenth amendment, a woman, who is a citizen of the United States and the State of Missouri, is a voter in that State, notwithstanding the provision of the constitution and laws of the State, which confine the right of suffrage to men alone.” The U.S. Supreme Court answered that question with a resounding no, a woman gained no rights to vote in such a situation. The respondent in that case, a female Missouri citizen, would gain no right to the franchise. The Happersett Court rejected the argument that a woman, born or naturalized in the United States and subject to its jurisdiction, is a citizen of the United States and of the State in which she resides, has the right to suffrage as one of the privileges and immunities of her citizenship, which no State constitution can abridge.

This was the environment that Ray, a young Black woman practicing law, was face with in America. While Washington D.C. was one of the most diverse cities in the U.S., with a population of African Americans representing approximately a third of the capital city, after four years, Ray closed her law practice and moved to Brooklyn, New York. In N.Y.,  she worked as a public school teacher and became a member of the National Association of Colored Women. On January 4, 1911, at age 60, Charlotte E. Ray died in New York. On March 2006, The Northeastern University School of Law in Boston chapter of Phi Alpha Delta Law Fraternity International honored her legacy by naming their newly chartered chapter after her, in recognition of her place as the first female African American attorney in the United States.
Email ThisBlogThis!Share to TwitterShare to FacebookShare to Pinterest