When considering the incredible obstacles surmounted by A. G. Gaston and his outstanding business successes, one wonders why his legacy is not recounted and revered more in the books, journals and chronicles of Black history. A towering business figure in Alabama, Gaston overcame poverty and racial discrimination to build a multi-million dollar business empire in the heart of the South. You will respect his conglomerate when you learn that his enterprises included an insurance company, two cemeteries, a savings and loan bank, a business college, a couple radio stations, a motel, a construction company and multiple real estate holdings.

Arthur George Gaston was born in Demopolis, Alabama to Tom and Rosa McDonald Gaston. His father was a railroad worker who died soon after Gaston’s birth. His mother worked in Greensboro, Alabama as a family cook to the wealthy Jewish businessman A. B. Loveman, the founder of the largest department store in Alabama —Loveman’s of Alabama.  Gaston spent his early years in Demopolis with Joe and Idella Gaston, his paternal grandparents. It is reported that, while poor, his grandparent’s house was the only one with a swing — and opportunity the young, entrepreneurial Gaston used to charge the local children to ride the swing. By 1905, at the age of 13, Gaston would move back with his mother, this time to Birmingham, Alabama where she accompanied the relocated Loveman family.

Gaston’s mother enrolled him in the Tuggle Institute when they arrived in Birmingham. The Tuggle Institute was a privately run charitable school for African American, the namesake of the social reformer Carrie Tuggle. The school was modeled after the Booker T. Washington industrial educational schools, which emphasized developing trade skills and small businesses. In fact, Booker T. Washington visited the Tuggle Institute on numerous occasions to give inspirational speeches to the students. Gaston was naturally influenced by the philosophy of “pulling ones self up by his or her boot straps”, which was the hallmark of Washington’s message. After completing the tenth grade, Gaston left the school and started working selling the black-owned newspaper founded by Oscar W. Adams in 1907, the Birmingham Reporter. The young Gaston also started working as a bellman at the Battle House Hotel in Mobile, Alabama. 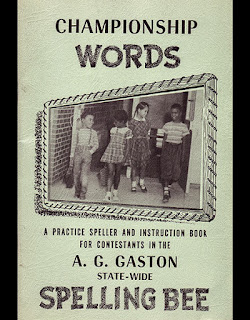 In 1913, Gaston enlisted in the U.S. Army and was assigned to the all-Black Ninety-second Infantry Division that was deployed in World War I combat in 1917. Of his $20 monthly military pay, it is reported that Gaston sent $15 home towards his first real estate mortgage investment in Birmingham. When he returned to Birmingham after the war, Gaston drove a delivery truck for a dry-cleaning company. He also worked in Fairfield, Alabama as a Tennessee Coal and Iron Company miner. While there, Gaston sold lunch sandwiches to his co-workers and eventually became a lending source to them.
The Booker T. Washington Burial Society & The Booker T. Washington Business College
By 1923 Gaston founded his first business, the Booker T. Washington Burial Society, the same year he married Creole Smith. While working in the coal mines, Gaston undoubtedly saw many early deaths from what we now recognize as harsh and unsafe working conditions in the mines. The need for poor Blacks to have affordable funeral burial services was not lost of Gaston, and as a result the fraternal order burial society was developed, along with the funeral services. Gaston attracted members from local church congregations, as well as his sponsorship of local radio programs aimed at African Americans. By 1932, Gaston has established the Booker T. Washington Insurance Company, which not only offered burial services, but also life insurance, health insurance and accident insurance. He would branch this business off into casket manufacturing and the operation of two cemeteries. In 1923, he entered a partnership with his father-in-law A. L. Smith and started the Smith & Gaston Funeral Home on real estate he bought and renovated near Kelly Ingram Park in downtown Birmingham.
By 1938, Gaston’s first wife Creole Smith Gaston died. In 1939, he married Minnie L. Gardner Gaston. Always one to recognize a market demand, he and his second wife founded the Booker T. Washington business school after noticing a shortage of skilled administrative staff in the community to operate his businesses.
Growing His Alabama Black Businesses & Giving Back
Gaston continued expanding his empire. In the early 1950s, he responded to the difficulties African-Americans faced securing home loans from White-owned banks and opened the Citizens Federal Savings and Loan Association. This became the first Black-owned financial institution in Birmingham since the Alabama Penny Savings Bank closed 40 years earlier. Gaston also developed the Vulcan Realty and Investment Company. He started manufacturing, bottling and distributing a soda called Joe Louis Punch. He started the A. G. Gaston Home for Senior Citizens and the A. G. Gaston Motel. The motel, which became a refuge, met the great demand of African Americans traveling through the South during the 1950s where few White-owned hotels and restaurants welcomed Black people. Delving into media, Gaston also owned and operated two radio stations — WAGG-AM and WENN-FM — as well as provided public relation services for other businesses through S & G Public Relations Company. It was very clear that Gaston did not come to play with us.

Gaston gave back to the community. He donated $50,000 to establish the A. G. Gaston Boys Club in Birmingham. During the Birmingham civil rights movement In the 1960s, Gaston was sometimes criticized as being an accommodationist. It is not lost on history, however, that it was his wealth that was crucial to the achievement of the efforts of the civil rights movement. For example, Gaston provided civil rights activists such as Martin Luther King, Jr. with reduced costs accommodations at his motel. When King was arrested in 1963, it was Gaston who bailed him out of jail. His support of the civil rights movement lead to his motel being bombed on May 12, 1963. His home was bombed in September 1963. In 1976, Gaston was kidnapped and tortured with a hammer before he was rescued by the police.

Gaston has been bestowed with many honors. In 1975, he received an honorary law degree from Pepperdine University. Black Enterprise magazine named him “Entrepreneur of the Century in 1992. Gaston published his autobiography, Green Power: The Successful Way of A. G. Gaston in 1968. Read more about A. G. Gaston in the biography Black Titan, A. G. Gaston and the Making of a Black American Millionaire. New York: One World, 2004. His goal was to inspire Black entrepreneurship. His powerful life and words should not be lost on the generations.

Email ThisBlogThis!Share to TwitterShare to FacebookShare to Pinterest
0 comments