In Unity Is Strength: A Bavenda Folktale 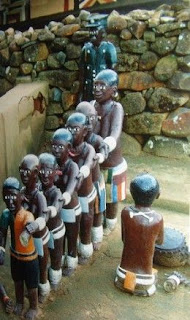 This is an African folktale about the strength of unity, from the Bavenda (aka Venda), a Bantu-speaking people who inhabit villages within South Africa. The word "Bavenda" means "the people of the world," yet the Bavenda tribal family prefer to live secluded lives far removed from outside influences.

The Bavenda follow ancient customs in training their young people. In remote mountain forests boys and girls from about the age of eight years old undergo rigid secret discipline in separate schools. Tribal elders supervise the schools. As in much of Africa, storytelling is a central part of training youth in the wisdom of of people.

Unknown to the Waterbuck, Lion watched them constantly. What a nice tasty meal Waterbuck would make, were his greedy thoughts. But three Waterbuck together were more than he could tackle.

One day the three friends quarreled. They separated. Each went his own way. And Lion chuckled to himself. He followed first one Waterbuck which he killed, then a second, then a third. There is strength in unity.

A Folktale from the Tuareg Near Timbuktu

The Tuareg have been counted among the most powerful tribal families in the West African region for many a moons. This is a story that is retold frequently among them.

Years and years ago, there was a young Tuareg man who felt he could get absolutely no recognition from his fellows. He went to a blacksmith and promised him a goodly gift if he could just make him a beautiful and powerful sword and a strong lance so that the young man might kill many men and gain the respect he so desired.

When he had left, the blacksmith went into the bush and cut down an acacia tree. From its trunk he carved a great wooden platter of the type used to bear the food in a feast. He employed great care and craftsmanship in bringing out the wood's natural beauty. When the Tuareg returned and asked for his sword and lance, the blacksmith gave him the platter.

"What is this?!" cried the angry man. "I asked for a good sword and lance." The blacksmith explained that to gain the respect the man desired, it would be much better to take the platter and fill it with food for his friends and relatives. If he did this everyone would admire and respect him.

The man thought long about the platter, while considering other blacksmiths in the village to employ for the service he requested. If he had wanted a carver, he would not have went to a blacksmith.

After long deliberation... the Tuareg man decided his course of action. He would carry out the blacksmith's instructions.

The first feast to fill his great wooden platter was gathered from his very own farm and cupboards. He became widely known. Word of his fine feasts even reached the highest chambers of Timbuktu, prompting visits by great calvaries of men and women seeking the honor of his fine company.

In later years, the man became chief in his Tuareg village in West Africa. Each year after becoming a chief, the great and wise man sent the blacksmith a cow -- the goodly gift he had promised if he gained renown. 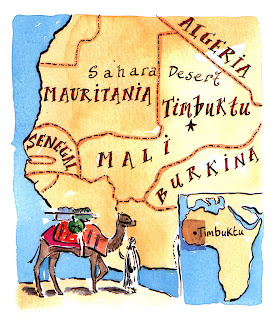 An African folktale on gaining recognition, from the Timbuktu region and attributed to the Berber people of Africa through the Tuareg kinship-tribal-family group of West Africa. "The Primitive City of Timbuctoo," by Horace Miner, Published for the American Philosophical Society by Princeton University Press, 1953. 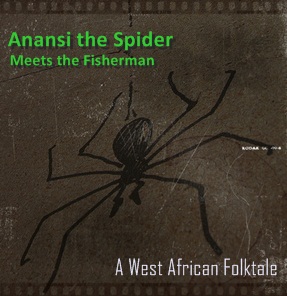 Anansi, the trickster spider, is one of the most important characters in West African folktales and folklore. His stories also arise in the Caribbean, South America and North America among African diaspora populations. For African Americans, many of the characteristics of Anansi are also found in the Br'er Rabbit trickster character whose great skill was escaping the trickery of his enemies. These re-tellings are an effort to continue the tradition of telling these African stories. - Vanessa Cross, author of "An Anthology of Black Folks Wit, Wisdom and Sayings"

"Let's go fishing," suggested Anansi to a local fisherman, as he thought this would be a great way to obtain a meal by letting the professional fisherman do his craft.

"Very well," said the fisherman, who was also clever and wise to the ways of Anansi. "I'll make the nets and you can rest." The fisherman made nets from a special material he retrieved from his bag.

Anansi closed his eyes for just a moment and before he knew it the fisherman had caught four fishes.

"Anansi, you take these," said the fisherman. "I'll take tomorrow's catch. I think there will be more fishes."

"No, you take these," said Anansi quickly, selfishly imagining a more plentiful next day catch. A fisherman would know better than anyone, right? Anansi thought to himself. "I'll take tomorrow's fish."

The next day, the nets were rotting away. The fisherman shrugged his shoulders, not able to explain the development. Of course, no fish were caught that day.

"Anansi," said the fisherman. "Take these rotten nets to market. You can sell them for some money to buy something to eat."

Anansi ran with the perishing nets to market. When Anansi shouted, "Rotten nets for sale!" the people in the market began to beat him with sticks. Anansi ran back to the fisher's bay.

"Some partner you are," Anansi said to the fisherman as he rubbed his bruises. "I took the beatings. At least you could have taken the pain." 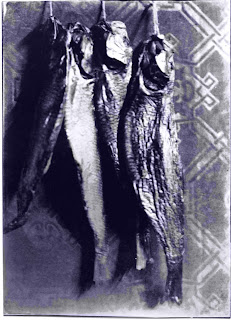 Kweku Ananse Outsmarts Himself
And although this happened a very long long time ago, Baboon and Ananse are still enemies and it is said that one of the reasons Baboon scratches a lot is that he often feels Kweku Ananse crawling all over his skin and in the hairs on his back. He just cannot stand Kweku Ananse.

Well, as I said, it happened so long ago that most of the details have been forgotten and except the old people, few really remember what exactly happened between Kweku Ananse and Adun the Baboon.

A very, very long time ago as the story goes, Kweku Ananse and Adun, the Baboon were the best of friends and went everywhere together. Most of the time Ananse wanted to just hang on the hairs of Baboon and Baboon treated Ananse with a great deal of respect and love. It is said that they were closer than brothers. All the animals admired them because they were happy and protected each other. They ate together and played together each day among the trees and at night. Baboon would find a large tree to make a bed with some leaves while Ananse just hung from the largest branch on the tree away from all predators.

Some folks said it was a symbiotic existence, a sort of mutual admiration society that benefits each other.

One very fine day as they were foraging for food they came upon a marsh and across the marsh was a banana tree.

Now, everyone knows how much Baboon likes to feed on ripe bananas. And so they crossed the marsh by stepping over the rocks where the Frog and the Turtle rest to soak the sunlight each day.

"Who goes there?" croaked Frog.

"No one but me," answered Baboon.

"And, who is this with you?" replied Frog

"Well," said Baboon. "This is Kweku Ananse. He is my best friend."

"And what are you two doing here?" asked Frog.

"Yes," added Turtle. "Why are you disturbing us here? We need our rest in the sun, you know."

"Sorry, Frog and sorry, Turtle. We don't mean to disturb the two of you." They replied.

"Then," shouted Frog, "then why are you crossing the marsh?"

"We have seen a banana tree with its ripe bananas on the other side. We all know that Baboon just loves bananas. And we hope to get some for ourselves," they said.

Frog and Turtle said, "OK you may cross over. For all we care you can take the whole tree away."

This is because bananas are not part of Frog's and Turtle's diet. And so the two old friends took the bananas back presumably to share. Well, that is where the trouble started. Seeing that the bananas were all yellow and ripe Kweku Ananse wanted them all for himself. Kweku Ananse did not want the share the bananas and after heated arguments about how to share Ananse came up with the idea of keeping the ripened bananas while Baboon kept the stump of the plant. Kweku Ananse picked his and kept the ripe bananas because he wanted to eat those delicious bananas right away without sharing it with his friend Adun. Ananse made a big mistake, which he did not know because he was thinking how smart he was. He did not know that Baboon knew all about how banana plants grew. So Baboon took his stump home, planted it, and waited patiently.

Time went by and one day when Ananse visited Adun he saw a very healthy banana tree growing in Baboon's yard. It was laden with ripe and juicy bananas. When he asked where it came from Baboon explained that unknown to Ananse, banana trees are peculiar and special in that without seed they just grow new shoots from the roots called rhizomes, Adzanka as the Ga people call it. And that was the secret to the banana tree that Kweku Ananse did not know and had to learn the hard way.

Now Baboon had all the bananas he could eat each time the fruit matured. So Baboon refused to share the fruits of the banana tree with Ananse. And up to now all we can say is that it cured Kweku Ananse from eating bananas. He learned a lesson.

As retold by Rev. P.E. Adotey Addo, a Ghanian born folklorist and writer who lives in North Carolina.