Africans in California under rule of Spain, Mexico and the United States

On September 4, 1781, 44 non-natives settled at what they would describe as El Pueblo de Nuestra Señora la Reina de los Ángeles (The Town of Our Lady the Queen of Angels), now known as Los Angeles, LA, or "City of Angels". At least 28 of those early settlers are reported as being of African descent. This settlement occurred during the time that the region now called Mexico was governed as a colony by Spain. Over a century before their arrival -- in 1570 -- an African slave revolt had occurred in the Veracruz region of Mexico, led by Gaspar Yanga. Prior to European travels to the Americas, the Olmec are among the oldest known civilization that resided and governed the territories now known as Mexico and California. 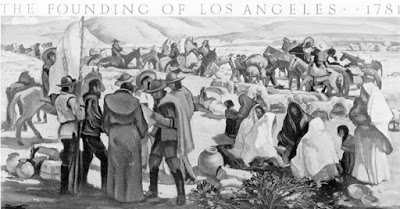 The Mexican War of Independence was an armed conflict which ended the rule of Spain in 1821. During the period that Los Angeles was part of Mexico (1821-1840), Blacks were an active part of Mexican society. Africans had been instrumental in the nation's successful war against Spanish colonization.


By 1829, Vincent Guerrero, Mexico's first Black president, issued a slavery abolition decree in Mexico. Of Afro-Mestizo descent, Vincente Guerrero was one of the leading revolutionary generals of the Mexican War of Independence in the early 19th century, and would serve as the second president of Mexico's First Federal Republic. By 1831, Emanuel Victoria served as California's first Black governor. Alta California's last governor, Pío de Jesus Pico, was also of mixed Black ancestry.

By 1850, the U.S. had won the Mexican-American War. This meant that Blacks residing in the California region could be subject to legal slavery again under U.S. colonial rule. The question of slavery extension under the United State's annexation of California became a central question. Based on the abolition of slavery in 1829 throughout Mexico, introducing slavery into California -- where African Americans in California had governed in key administrative roles under Mexico's governance -- would be difficult.

The editor of the Alta California, February 22, 1849, stated the case against introducing African slavery into California:


“The majority—four-fifths, we believe—of the inhabitants of California are opposed to slavery. They believe it to be an evil and a wrong * * and while they would rigidly and faithfully protect the vested rights of the South, they deem it a high moral duty to prevent its extension and aid its extinction by every honorable means.”

In a vote of 150 to 56 approving entry of California into the union of states, the California bill was passed in the U.S. House on September 7, 1850. Two days later, the Senate concurred and the U.S. President provided his approval. California would enter the union of states as a non-slave state.
Email ThisBlogThis!Share to TwitterShare to FacebookShare to Pinterest