Estevanico aka Estaban: The North African Moor Enslaved on 1528 Spanish Expedition to Americas

Estevanico aka Estaban was a Berber-speaking Moor born in North Africa and is among the earliest individually named Africans known to the Americas. Estevanico was born in Morocco, North Africa, raised in a North African Muslim family. In 1513, at about the age of 23 years, he was captured in Africa by Portuguese slave traffickers. We do not know his native name, only the name he took when made to convert to the Christian Catholic religion by his captors. We will refer to him as Estevanico.

In the year 1513, the enslaved Estevanico was shipped to Portugal from his native home of Morocco. Morocco is that region where the North African empire of Hannibal was headquartered at Carthage, founded in 9th century BC. In fact, Portugal was previously part of the nation of the Moors from 711 AD to 1492. The African Moors ruled what is now known as Spain and Portugal for 700 years when a migration of North and West African Muslims (Moors) entered the region -- Jews, Christians and Arab Muslims later joined the prosperous Moors. The Moors lost the Iberian peninsula to the Christian Crusaders by 1492. Based on the years of Estevanico's birth and capture, the White Christian Crusaders that originally invaded the Iberia soon crossed over to Africa and began capturing African Moors and enslaving them in the region.

By 1520, Estevanico was sold from Portugal to a Spanish captain, Andres Dorantes de Carranza. Dorantes joined Spain's sojourn into what was for them "The New World." By this time, Spain was establishing colonies along the Gulf Coast of what is now known as the United States and Mexico regions, and within the Caribbean islands and South America.

September 1528, Estevanico sailed with Dorantes' crew from port San Lucar de Barrameda on a Spanish expedition. The Spanish expedition included a fleet of five ships containing about 600 men. Estevanico sailed on the Magdalena as it made its way across the Atlantic Ocean landing first on the island of Hispaniola (aka Española). Hispaniola now contains the independent nations of Haiti and the Dominican Republic. 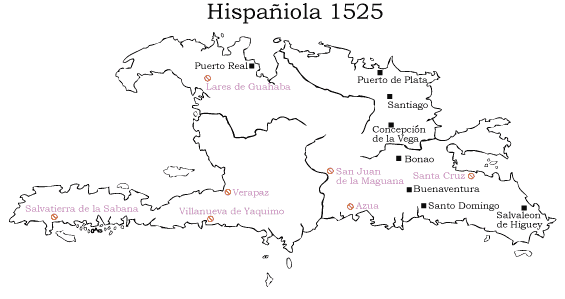 After a month, the ship continued to Santiago, Cuba and then Trinidad.When Estevanico and the Spanish crew arrived in the region now known as Tampa Bay, Florida the Spanish expedition of colonizers numbering about 300 in number. The men split the crews into sea and land expeditions and faced both friendly and unfriendly indigenous people in the Florida region. 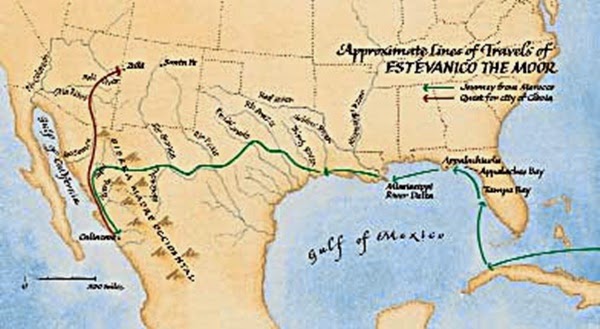 Estevanico and the ship's crew found themselves wrecked off the coast of Texas, the surviving among them numbering four. Those four men were three Europeans and the enslaved African, Estevanico -- thought to be the first non-Natives to this region. Estevanico's captivity continued among the surviving Spanish men -- which included Andres Dorantes and two others. The men made small ships from animal hides and eventually began to travel along the Gulf of Mexico Coast region. They ventured into the interior and are known to have traded with native peoples in the region to survive. This subsistence among the four men lasted about 8 years.

By July 1536, the four men arrived in New Spain, now known as the State of Sinaloa in northwest Mexico. Estevanico and the other three expedition survivors were received in Mexico City by the Spanish Viceroy of New Spain. Estevanico was granted his freedom at that time and was also noted by commentators as being received to the region's Avavares tribe as a medicine man. There may be a number of theories to explain why Estevanico was seen as a medicine man among the natives to the region.

The region of Mexico is part of the earliest known civilization in the Americas, the Olmec kingdom whose remaining sculptures portray prominent negroid features. Additionally, the wisdom Estevanico exhibited to survive against these historical odds can also be contributed to knowledge obtained from his native African people of Morocco. He was already 23 years old when captured into European slavery.

What remains of the record states that by 1539 Estevanico led Fray Marcos of Nice into what is now known as the western region of the State of New Mexico, in the United States. He knew the region as well as many non-Natives because of his 8 years wondering and trading with native tribes after the Spanish expedition's shipwreck. Ultimately, Estevanico's demise arose when the natives saw Estevanico leading the expedition of white European men into the region. That year, in 1539, he was killed by the indigenous people at Hawikuh, New Mexico.
Email ThisBlogThis!Share to TwitterShare to FacebookShare to Pinterest