The color barrier in professional golfing in the United States was broken by Charlie Sifford, the first African American golfer granted a Professional Golf Association (PGA) of America tour card. Sifford would go on to win more than a million dollars in official prize money and was the first African American golfer inducted into the World Golf Hall of Fame in 2001. He died Tuesday, February 3, 2015, at age 92.

"His love of golf, despite many barriers in his path, strengthened him as he became a beacon for diversity in our game," said Derek Sprague, president of PGA, in an AP report. "By his courage, Dr. Sifford inspired others to follow their dreams. Golf was fortunate to have had this exception American in our midst."

Sifford, known as the "Jackie Robinson of golf",  received a tour card after the PGA desegregated in 1961. Many others, however, chipped away at the history of racial segregation in golfing before Sifford. In addition to Charlie Sifford, men such as James Black, Jim Dent, Lee Elder, Pete Brown, Calvin Peete, Ted Rose, John Shippen, Bill Spiller and Jim Thorpe are among the many heroes of African Americans in golfing. 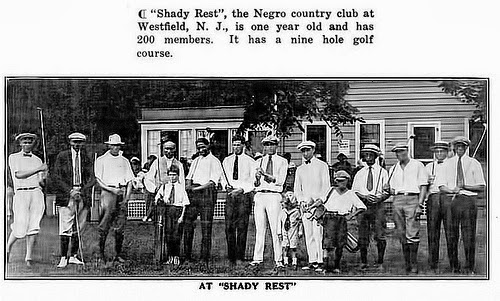 The history of the African American golfer began in the caddy shacks of American golf country clubs. By September 21, 1921, however, a group of prominent African American investors known as the Progressive Realty Company, Inc. purchased land in Westfield, New Jersey. This collective established the Shady Rest Golf and Country Club, the nation's first African-American owned and operated country club.

Shady Rest Golf and Country Club was the home course of John Shippen, the first African American golfer to play in the U.S. Open in 1896. In addition to trail-blazing as a home to African American golfers, the club became known for drawing legendary entertainment, such as jazz legends Duke Ellington, Sarah Vaughn, Count Basie and Ella Fitzgerald. In fact, the history of the club is that white Americans sometimes gathered outside its gates to hear the legendary music.

By 1925 in Scotch Plains, New Jersey, the United  Golfers Association (UGA) was developed. The UGA was to golfing what the Negro League was to baseball -- a fraternity of African Americans intent on participating in organized sporting events. The UGA tournaments were often referred to by its golfers as the "Chitlin' Circuit", a term also used by African American entertainers to describe the limitation to segregated venues.

The golf courses the touring UGA was limited to were primarily public municipality courses that were not always in the best shape. Black people -- being very resourceful where resources are limited -- developed their own golf courses in the early days of segregated golfing. This included such innovations as creating golf courses near housing projects, golfing with tobacco sticks when clubs were limited, and making use of dogwood tree bark as putters.

The UGA provided an outlet for African American golfers and offered those serious about playing the game of golf an opportunity to win the purse that was collected for winners through entrance fees. The resources available to create the UGA purses were often limited. They were in no way comparative to the purses that the PGA raised for its winners. Comparatively, the purse was about 10 to 1. An average PGA purse in the 1920s and 1930s may have paid $250.00, while the UGA winner received about $25.00. It was no wonder why African American golfers were interested in competing in the PGA -- especially those who sought to make a living from the sport, as other Americans were at the time.

The pinch, however, was that the PGA constitution, as it read in the 1960s, contained a Caucasian-race only clause. It arose from a heritage of exclusion -- the legacy of country club culture in the United States. The UGA never had a racial exclusionary clause. In fact, golfers of Caucasian heritage began to participate in the UGA competitions early in its history.

Many of the great African American golfers were forced to become caddies, carrying the bags of European Americans, simply to make a living because they were denied the opportunity to compete in the professional tours.

In 1948, three African-American golfing greats -- Bill Spiller, Teddy Rhodes and Madison Gunther -- filed a lawsuit against the PGA alleging damages for being barred to participate in the PGA golf tournament in Richmond, California -- outside of Oakland.

The three men had qualified the week before in the L.A. open. The PGA wiggled out of this challenge to its racial segregation clause by changing the PGA designation from "opens" to "invitations". African Americans were never invited and, as a result, were limited in their opportunity to become professional golfers.

A little known Black history fact in African American golf history is that Joe Louis -- the 1938 heavy-weight champion who knocked out the German Max Schmeling -- also chipped at the PGA's color barrier at a 1952 San Diego Opening. The organizers of the opening allegedly didn't know there was an PGA Caucasian-only clause. When they learned of it they challenged it under a sponsor's exemption when Louis qualified for the tour as an amateur golfer. As an amateur golfer, he was the first African American to play in an PGA tour event. The fight for inclusion became Joe Louis' cause.

By 1960, Stanley Mosk, then attorney general of the State of California, was among the limited European Americans to support African American golfers. Mosk called the PGA, which was planning another tour in California, and said that if they did not open to African Americans they couldn't play in California. The PGA moved their event to Pennsylvania. The NAACP became active in the cause. Eventually, the PGA was forced to remove its Caucasian-only clause. It was at this time that Dr. Sifford was able to obtain a PGA tour card to compete with other professional golfers. Today, there is now a Dr. Charles L. Sifford Golf Course at Revolution Park in Charlotte, North Carolina -- a great homage to this legacy.