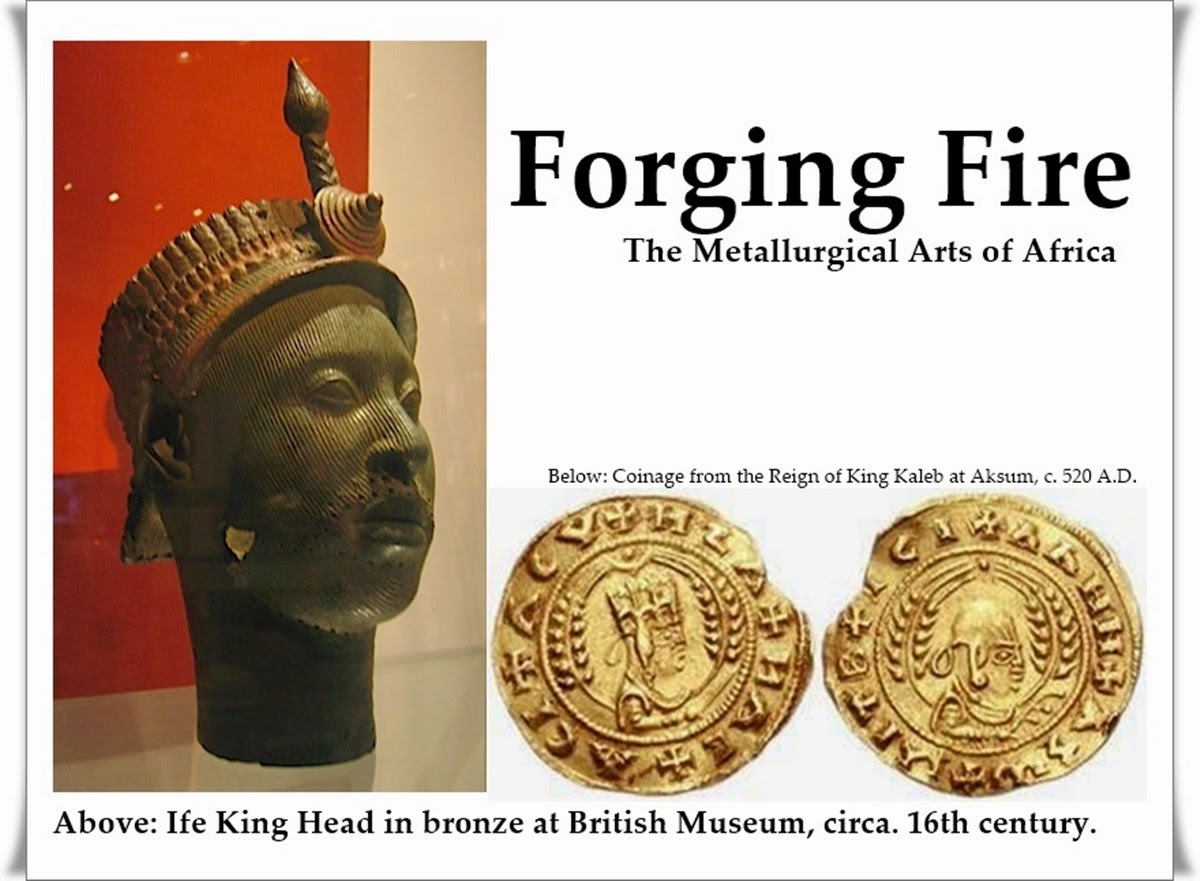 While it has been advanced by many European and European-descent scholars that the iron age began in Eurasia circa. 1000 BCE, recent archaeological discoveries in Nigeria suggests that iron smelting and blacksmith work was performed at a much earlier time -- as early as 2000-2500 BCE -- at high-levels of production and involving wide trade distribution among the ancient Igboland peoples in West Africa. 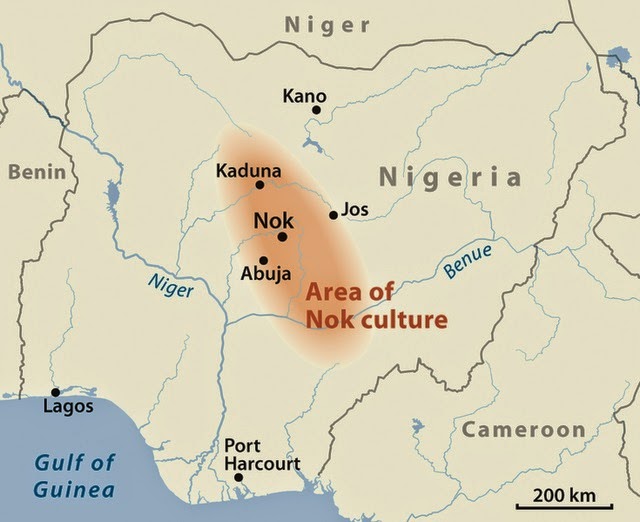 Prior to this, the earliest known African advances in metal works were found among the Nok, who appear to have been the cultural ancestors of the Yoruba who developed the Ife sculptures centuries later. According to Roger Atwood, writing for Archaeology magazine, "Carbon dating of charcoal inside the [Nok] furnaces revealed dates as far back as 280 B.C., giving Nok the earliest dates for iron smelting in sub-Saharan Africa up to that time." A collection of Nok terracotta heads and figures were found among tin mines and many of these works are housed at a museum at Jos in central Nigeria. Other carbon dating established that items were deposited in the region from 500 BCE to 200 by the Nok. By the 13th century, we see the Ife cultural arts develop into a sophisticated court art that represented specific figure heads such as kings.

Also around 500 BCE, Nubia was in her Meroitic phase and was producing and trading iron. By 270 CE, at current day Ethiopia, coins in gold, silver and bronze were produced by the Aksumites under King Endubis.

At one point in Western scientific literature, it was thought that sub-Saharan Africans did not invent iron independently. This notion was abandoned more than a century ago. German scholar, Ludwig Beck, who published a five-volume history of iron between 1884 and 1903, wrote in his first volume: ". . . [w]e see everywhere an original art of producing iron among the numerous native tribes of Africa, which is in its entire essence not imported but original and . . . must be very old."  The American linguist Christopher Ehret asserts the following:


Africa south of the Sahara, it now seems, was home to a separate and independent invention of iron metallurgy . . . To sum up the available evidence, iron technology across much of sub-Saharan Africa has an African origin dating to before 1000 BCE.

"More and more numerous datings are pushing back the beginning of iron production in Africa to at least the middle of the second millennium BC, which would make it one of the world's oldest metallurgies," states Hamady Bocoum, Senegalese archeologist. Gaston Maspéro, a French Egyptologist, concluded that ancient Egypt learned iron works from Africans to the south. This sentiment was corroborated by the German Felix von Luschan, who also thought sub-Saharan Africans originated iron technology, as did the British metallurgist William Gowland. 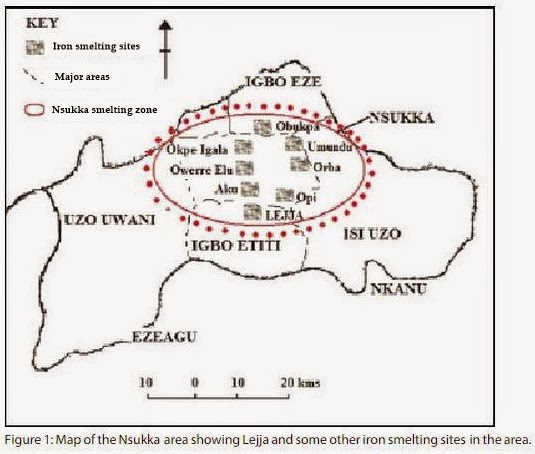 The more recent scholarship of Dr. Pamela Eze-Uzomaka, Nigerian scholar, states that the study of the prehistoric iron smelting site at Lejja, Nigeria has found the existence of a thriving iron smelting community with hundreds of furnaces, tuyeres and slags visible from the surface at the main village square. Interrupted by modern history, this iron smelting Lejja site has been reported by Dr. Eze-Uzomaka as extinct, no active iron smiths in the community. The debris from the iron smelting site has, however, been radiocarbon dated to approximately 2000 BC.
As early as precolonial times, iron work in ancient Igboland was highly ritualized. Supernatural forces were solicited by the smiths and smelters to participate in and supervise the production process for metals. This is described by Onwuka N. Joku as the "magico-religious context of iron production" that releases the powers of iron. Joku writes:

Traditional iron working involved considerable technical and artistic skill as well as brawn. However, to the Igbo, a lot more was required, namely, the possession of esoteric powers. Such esoteric powers were deemed inevitable as iron was believed to possess inherent mystical qualities. Iron was 'charged' and consequently dangerous to all persons except those who had the uncommon gift of knowing how to handle it. The core of this knowledge was 'acquired by blood'; that is, it was inherited by birth.

The apprenticeship training was long and rigorous throughout Igboland. The iron smithing guilds held varying strickness in allowing entrants from non-smithing lineages. An aspiring apprentice from a non-smithing family could be required to undergo a number of associated practices and rituals before attempting to practice smithing. Without the mystical powers obtained from the iron deity through blood lines, the mysterious act of turning earth into iron and iron into tools, ornaments and other items was generally thought to be next to impossible, within the guilds. Again, entry into a guild without being in the family line was possible among some guilds, with additional rituals and tests for the aspirant.

Dr. Eze-Uzomaka's research also links prehistoric Igbo iron smith and smelting directly to ancient Nile Valley civilizations. She asserts that many of the same deities were being employed on the West and East coasts of Africa in prehistoric times. She states that the ancient Lost City of Heliopolis, referenced by the ancient Egyptians, was located in Igboland where iron work was produced directly for distribution to locations as far as the Nile Valley region of Africa. The Igbo-Kmt connection existed at Lejja, states Eze-Uzomaka. This ancient Igboland was the Lost City of Heliopolis, the Ancient Egyptian Duat, Temple of the Sun.

The record provides evidence that the ancient Africans enjoyed a sophisticated understanding and relationship to natural metals. These metals were employed in their arts, coins, tools and weapons. Metallurgical guilds arose to develop and protect the knowledge attained among the people of different regions. The existence of highly sophisticated inter-Africa trade in metals is probably the most exciting aspect of the current scholarship. If West Africans were supplying iron as far as the Nile Valley regions, the relationships among African peoples on the continent is surely in its infancy stages of discovery.