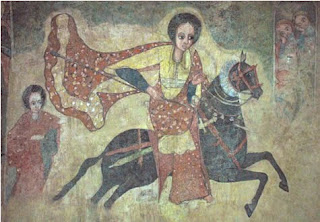 According to the Kebra Negast (Kebra Nagast, Ge'ez: kəbrä nägäst, "the Glory of Kings"), a nearly 700 year old text from Ethiopic antiquity, the imperial family of the Nile region are offsprings of The Queen of Sheba, named Makeda (mākidā) in the Ethiopian account, which translates literally to "pillow." 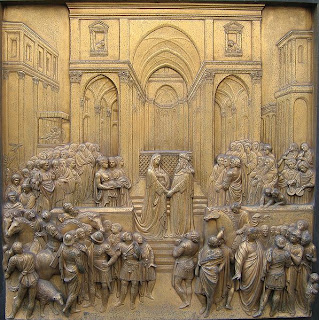 Batisterio san giovanni Florence (Italy), Salomon meets the Queen of Saba,
on the Paradise Door of the Florence Baptistry

Menelik I (Menyelek I) (also known as Ebna la-Hakim, Ibn Al-Hakim, "Son of the Wise") was the only offspring of The Queen of Sheba of the ancient Kingdom of Sheba / Axumite Kingdom. King Solomon of ancient Israel was his father.  The Queen of Sheba and King Solomon are both referenced within the Christian, Hebrew, and Qur'anic (Koran) Biblical accounts (See Table of Nations (Genesis 10:7)). 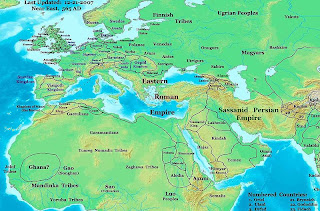 This East African kingdom at historical points may at least have included parts of areas of Egypt, Sudan, Ethiopia, Eritrea, and Yemen. This early kingdom of antiquity, under the historical throne of Sheba, may have reached as far south as Zanzibar (“San-Sheba” or see Persian: "Zangi-bar" with "Zangi" meaning "Black" and "Bar" meaning "the") in Tanzania. See also Kemet [keh-MET translates "Black Land"). 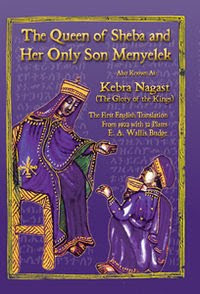 The Kebra Nagast is an account originally written in the Ge'ez language (Semetic/Ethiopic/Nilotic) and recounts the origins of the paternal Solomonic line of the Emperors of Ethiopia. The Kebra Nagast is considered by the Ethiopian Orthodox Church and Rastafarian communities in the Africas as an inspired and accurate historical account of how The Queen of Sheba met King Solomon and about how the Ark of the Covenant came to the Axum (Aksum, Aksûmite, Tigray-Tigrinya Province) region of current day Ethiopia and Eritrea, upon The Queen's return from ancient Israel with the male child, Menelik I.

According to the Kebra Nagast, Menelik I became the first Imperial ruler of Ethiopia, the first of a line of Aksûmite Kings. The translation of the ancient text records of the Kebra Nagast also contain accounts of the early creation stories of the people of this region, which today's science definitively concludes is the birthplace of humankind and human civilizations.

It is said that Menelik's father, King Solomon, gave the Ark of the Covenant to The Queen of Sheba  to be delivered as his prayer that "the New Jerusalem" would have its throne at Axum. In 1967, Edward Ullendorff stated in his famous lectures that "[t]he Kebra Nagast is not merely a literary work, but -- as the Old Testament to the Hebrews or the Qur'an to the Arabs -- it is the repository of Ethiopian national and religious feelings."

The Queen of Sheba made the northern city of Axum home after returning from her trade journey to Israel. According to Ethiopian tradition, Menelik I and the Ark of the Covenant was brought with Makeda. Many believe Haile Selassie I, born Tafari Makonnen, to be of direct blood lineage from Menelik I, who began the East African Kings' long rule in the region, starting around 950 BCE. Haile Selassie I's royal lineage has been a fact of debate among African scholars. It is known, however, that royal imperial families continue on the African continent despite the more recent historical development of African national governments. The African Continents Kingdom Federation's (ACKF) current leader is Imperial Matriarch Empress Shebah `Ra - Queen Shebah III of the royal family line of African Continent Nubian Nations Sheba Imperial Empire Kingdoms (0/1 Dynasty – 2nd Millennium – 7 Dynasty), a matriarchal throne.


Nights Over Egypt by Incognito (original by The Jones Girls)

As it was in antiquity, priests gather at Lalibela, Ethiopia 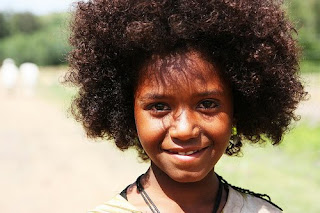 And the dialogue continues...