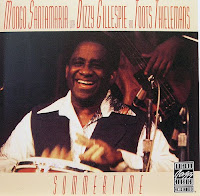 Ramón "Mongo" Santamaria
Ramón "Mongo" Santamaría was born April 7, 1917 in Havana, Cuba. Best known as Mongo Santamaria, the Havana-born musician earned a reputation as one of the great Afro-Cuban Latin jazz drummers. He spread the collaborative spirit of the Jazz Era in 1950 when he moved to New York and began playing with Tinto Puente, Cal Tjader, and others. The stage name of Japanese actor Yūsuke Santamaria was inspired by Mongo Santamaria.
His "Afro Blue" became a jazz standard and was popularized as a remake by John Coltrane. Mongo's Jazz Funk remake of Herbie Hancock's 1963 "Watermelon Man" led to his induction into the Grammy Hall of Fame in 1988. He died February 1, 2003.
Email ThisBlogThis!Share to TwitterShare to FacebookShare to Pinterest