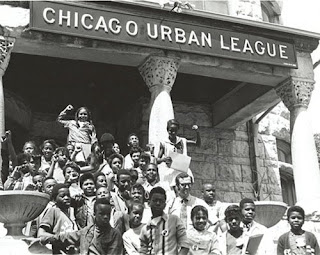 Photo of children outside of the Chicago Urban League
In 1916 a group of community leaders established what would become one of the oldest and largest race relations agencies in the country. The organization was founded to assist African Americans migrating from the South to Chicago during the Great Migration. It helped the new residents with services in housing and employment matters. 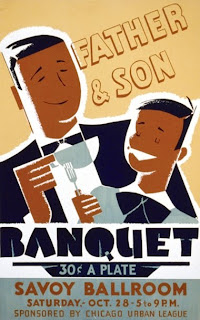 WPA Poster Collection)
In cooperation with seven other offices around the city, the Chicago Urban League was instrumental with stabilizing the African American community after the Chicago Race Riots of 1919.
As one of the first institutions to produce sociological studies of the community, it became the forerunner in reporting important findings in the area of race relations, labor relations, and juvenile delinquency. It is the oldest and largest of the 113 National Urban League affiliations across the country.
The Chicago Urban League occupied the Swift mansion shown above for years. Its offices are now located next door to its historic residence, a modern multi-level office facility at 4510 S. Michigan Avenue in Chicago.
Email ThisBlogThis!Share to TwitterShare to FacebookShare to Pinterest