Photo: Alexander Crummell (b. March 3, 1819 - 1898)
Alexander Crummell, A.B., D.D., LL.D was born March 3, 1819 in New York City. He was friend and mentor to W.E.B. Du Bois and an outspoken social commentator and clergyman in nineteenth century America. He founded the American Negro Academy and became a  critic of his contemporary Booker T. Washington.

"His father, Boston Crummell, was the son of a West African chief in Timanee. On his maternal side, Crummell’s ancestors had been free residents in New York for generations," according to the Alexander Crummell Collection, published by Scholarly Resources, Inc. His grandfather is said to have been a chief within the Vey tribe of West Africa.

"And, lastly, our boys and girls almost universally grow up without trades, looking forward, if they do look forward, many of them, to being servants and waiters; and many more, I am afraid, expecting to get a living by chance and hap-hazard.

Doubtless some of you will say that the colored people are not the only people at fault in these respects; that the American people, in general, are running wild about the higher culture -- are neglecting trades and merchanism, and are leaving the more practical and laborious duties of life to foreigners." 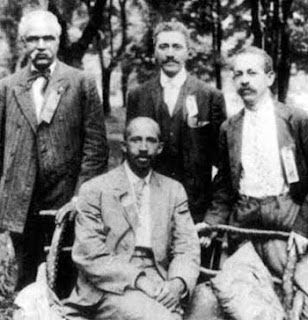 Crummell's American Negro Academy was an association of Africans from around the world. It was among the early societies of global Africans that would associate for progress of African people. The academy would advocate the “Talented Tenth” concept later articulated in the public writings of W.E.B. DuBois, one of the academy's founding members. Crummell's members in Liberia and Sierra Leone would pave the way for W.E.B. DuBois building associations between Blacks in America and Blacks in Africa.

Further reference: "Encyclopedia of Missions," by Harry New-comb; and in a sketch called "Africa in Brief," by the Rev. J. J. Coles, missionary to the Vey tribes in Africa.
Email ThisBlogThis!Share to TwitterShare to FacebookShare to Pinterest