It has been said in the sacred stories of our West African Yoruba tradition that Oshún (sometimes written Oshun or Osun) is the only Orisa able to approach Olodumare (aka Olorun) directly, carrying prayers from the mouth of humanity to Olodumare's ears. This is the story of Oshún's flight and how she became the messenger of Olodumare.

In the early days of the world, and of Ilé Ifé, the orishas became tired of serving Olodumare. They began to resist the Lord of Heaven's edicts and to even plot the overthrow of Olodumare's kingdom in heaven and earth. They felt they didn't need Olodumare and that as the Lord of Heaven was so distant anyway, they could merely divide the aché or powers among themselves and that things would go much better that way.

When Olodumare caught wind of this attitude and their plots, the Lord of Heaven acted simply and decisively. Olodumare simply withheld the rain from the earth. Soon the world was encompassed by a staggering drought, the ground became parched and cracked, the plants withered and died without water. And it wasn't long before all on earth, orishas and their children alike began to starve.

After a short time, growling bellies and sallow faces began to speak louder than pride and rebelliousness. They unanimously decided to go to Olodumare and beg for forgiveness in hopes that this would bring rain back to the world. But they had a problem: none of them could reach the distant home of Olodumare. They sent all the birds one by one to attempt the journey but each and every one of them failed, tiring long before reaching the palace of the Lord of Heaven. It began to appear that all hope was lost. 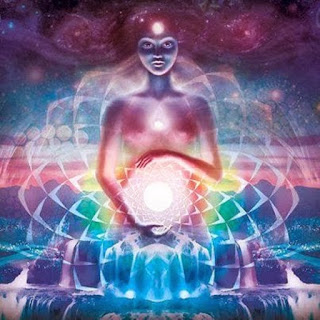 Then one day, the peacock, who was in reality Oshún herself, came to offer her services to save the world from this drought. Once again, there was general upheaval and even more laughter as the orishas considered the idea of this vain and pampered bird undertaking such a courageous and dangerous journey. "You might break a nail," said one.
But the little peacock persisted. As they had nothing to lose, they agreed to let Oshún go on the world's behalf. So the little peacock flew off towards the sun and the palace of Olodumare. Oshún soon tired of the journey, but she kept flying ever higher, determined to reach the Lord of Heaven and to directly plea for the world.

Going yet higher, Oshún's feathers began to become scraggly and black from the withering heat of the sun, and all the feathers were burned from her head.
But she kept flying.
Finally, through sheer will and determination she arrived at the gates of Olodumare's palace. When Olodumare came upon her she was a pathetic sight. Oshún had lost much of her feathers and the ones that remained were black. In all truth, Oshún was looking quite scraggly. To get to heaven she had to fly so close to the sun and sacrifice her beautiful feathers. The Lord of Heaven took pity on Oshún and brought her to the Palace where she was fed and given water, and her wounds were treated.

He asked Oshún why she had made such a perilous journey. She explained the state of earth and went on to tell Olodumare that she had come at risk of her own life so that humanity might live. 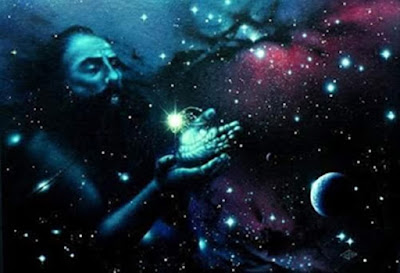 Olodumare looked to the world. He then looked to Oshún's plaintive face. It was obvious that everything she had said was true and he was moved by Oshún's capacity to love. The Lord of Heaven turned to the peacock, who wasn't a peacock anymore. The flight for humanity turned Oshún's outer form into that of a vulture. He ordered the rains to fall from heaven.

Then Olodumare looked deeply into Oshún's eyes and into her heart, then announced that for all eternity she would be the Messenger of the House of Olodumare and that all would have to respect her as such. From that day forward, in this path, Oshún became known as Ikolé, the messenger of the House of Olodumare. Ikolé also is the name for the vulture in Lacumí. And from that day the path of Oshún known as Ibú Ikolé was revered and became associated with her bird, the vulture. The vulture then returned to earth, bringing with her the rain, where she met with great rejoicing.

As benefits a Queen or Iyalodde, Oshún graciously refrained from reminding them of their jibes and abuses as she could see the shame on their faces. This is why, whenever a person is to become initiated as a priest in the Yoruban religion, no matter which orisha they are having seated in their heads, they must first go to the river and give an account of what they are to do -- as Oshún is the Messenger of Olodumare.
Email ThisBlogThis!Share to TwitterShare to FacebookShare to Pinterest