Jackie Ormes was born Zelda Mavin Jackson in Monogahela, Pennsylvania on August 1, 1911 to parents William Winfield Jackson and Mary Brown Jackson. Her family owned and operated a printing business and a movie theater that served the Pittsburgh community up until 1917 when her father died in a motor vehicle accident. Ormes was certainly influenced by this family tradition in printing and entertainment as she would later become the first African-American woman syndicated cartoonist in the United States.

Ormes began her journalism career in 1930 at the Pittsburgh Courier as a proofreader, later covering the police beat and other community stories. A year after marrying Earl Ormes in 1936 -- whom she would be married to for 45 years, until his death -- her big break as a comic strip artist unfolded. From 1937 to 1938, the weekly Pittsburgh Courier started publishing her first comic strip Torchy Brown in "Dixie to Harlem," a humorous depiction of a Mississippi teen who found fame and fortune singing and dancing in the Cotton Club.

In 1942, Ormes and her husband would move to Chicago. As a woman, she was a trailblazer in becoming a syndicated cartoonist because such professional opportunities were very limited for women of any race. In addition to the Pittsburgh Courier, her work would also be featured in the widely circulated Chicago Defender.  In Chicago, Ormes developed the Patty-Jo 'n' Ginger and Candy comic strips. The Candy comic strip ran for four months in the Chicago Defender, while Patty-Jo 'n' Ginger ran for 11 years. During this time, Ormes also published a social column and wrote special assignment pieces for the newspaper. 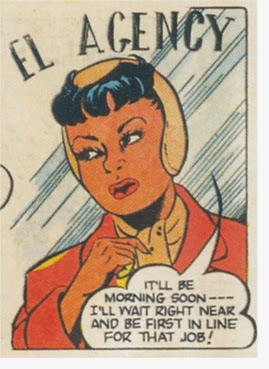 Even for the casual observer, it is apparent that African American cartoonist Jackie Ormes modeled some of her beautiful female characters after herself.

Ormes' work later developed into other mediums of expression for her characters, such as the mass production of the Black doll modeled after her Patty Jo character. In 1947, this doll was launched and accompanied by a trove of elegantly styled clothing for the delight of youngsters. She also developed the "Torchy Togs" paper doll series.

While creating a comic strips can seem a very non-political endeavor, Ormes' work included social and political satire that landed her on the FBI's investigation list during the McCarthy era. She bravely addressed racial injustice, as well as domestic and foreign policy related to equality, environmental pollution and war issues. Ormes retired in 1956, ending the eleven year run of the Patty Jo 'n' Ginger comic strip. She remained active, however, within the African American community in Chicago through her services with the Chicago Urban League and Clarence Darrow Community Center.

The great number of Jackie Ormes papers are now housed as The DuSable Museum of African American history through a project funded by the Black Metropolis Research Consortium "Color Curtain Processing Project." The papers span from 1938-1985, reflecting her professional and social life in Chicago during that period.
Email ThisBlogThis!Share to TwitterShare to FacebookShare to Pinterest