What Harriet Tubman Teaches Us Today

Harriet Tubman was an African woman and anti-slavery activist in the eastern Atlantic coastal region that would become known as the New England and later the United States of America. Tubman carried out clandestine operations against slavery that could rival the most sophisticated military strategies known to Western military lore. If you are wondering why her story is not revered more in U.S. history, it is because she symbolizes the defeat of the myth of European dominion over African people.

An exact date of birth for Tubman is unknown, but commentators report that she believed she was born in 1825, accounts vary from 1820 to 1825. Her parents were Harriet Green and Benjamin Ross, a captured and enslaved African couple who named their girl child Araminta Ross. The name Araminta also arises among the children of Africa in Salvador, Bahia. There is also the city of Aramita in the Oyam District, in the Northern Region of Uganda. The accounts are not clear as to the exact origins of her parents in Africa. Her maternal grandmother, whose name was Modesty, is her earliest known ancestor born in Africa. Her grandmother would arrive into slavery among the Patterson family along the Eastern Shore of Maryland, according to the biographer Catherine Clinton's book Harriet Tubman: The Road to Freedom. Araminta Ross had brothers and sisters and would marry and have children of her own. In 1844, at the age of 25, she married John Tubman. She married Nelson Davis in 1869 and they shared 19 years in marriage. After becoming free, she changed her name to Harriet -- the name of her mother.

What have we learned from Harriet Tubman? I asked this question during times when musicians and artists of African descent feel it appropriate to fictionalize her life through imagery that would bring debauchery upon her legacy. While comments require review at this blog before posting due to efforts to crash the blog through comments, I encourage you to share your own thoughts about Tubman here.

Where Do We Go From Here?

In 1967, when Dr. Martin Luther King, Jr. penned his Atlantic speech Where Do We Go From Here? King must have been channeling our ancestors, including Harriet Tubman. For Tubman, the answer to this age old question of a long wandering people, people of an ancient lineage - the oldest - was clearly that we must not maintain a presence among those who would enslave our very bodies. While physical slavery among Africans has been overcome, in significant part -- I will leave discussion of the prison industrial complex as physical slavery to another day -- the biggest challenge facing African families in the diaspora today is systemic racism that is fueled by the continued myth of European superiority. This translates in our daily lives into the marginalization of African family life at various levels: spiritually, psychologically, economically, etc.

Where do we go from here? We must maintain our cultural integrity among a people who would exploit our talents to promote debase cultural arts. We must establish community institutions and family structures that promote real freedom for our children. We must honor the old civil rights. These are all fights worth undertaking.

Save Yourself - By Any Means Necessary

There has been a long running dictomy within African cultures since time immemorial. Malcolm X and King were examples of but one of those dictomies, representing the African Muslim man and the African Christian man. What the two men shared was the one great aim towards the freedom of African people. Nothing extra, just fair opportunity like everyone else on the planet.

Harriet Tubman did not wait on anyone to free her from the bondage of physical slavery. She did not wait on a leader to rise up. She became the leader. She proclaimed herself free. Equipped with a steadfast determination that freedom was her natural lot and no human had a right to take that away from her, Tubman teaches us that we must first save ourselves, by any means necessary.

The Cambridge Democrat promised a reward for the recovery of "MINTY, aged about 27 years, is of a chestnut color, fine looking, and about 5 feet high." She would fetch $50 if located in Maryland. During the 1930s, the artist Jacob Lawrence depicted the life of Harriet Tubman and included a runaway notice as text for one of the 31 images in his art panels. The caption stated "negro girl, Harriet, sometimes called Minty. Is dark chestnut color, rather stout build, but bright and handsome. Speaks rather deep and has a scar over the left temple." 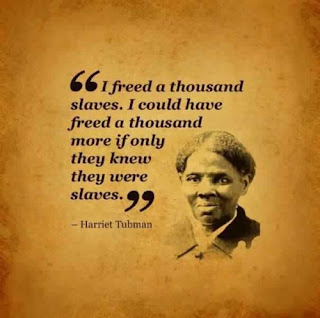 Don't Look Back - No Fear

Before Harriet Tubman escaped, she spoke of a recurring dream of a "flight" to freedom:


"flying over fields and towns, and rivers and mountains, looking down upon them 'like a bird,' and reaching at last a great fence, or sometimes a river, over which she would try to fly.... It "'peared like I wouldn't have the strength, and just as I was sinkin' down, there would be ladies all drest in white over there, and they would put out their arms and pull me 'cross." -- From Harriet Tubman, the Moses of Her People, Sarah Bradford (1993).

One of Harriet Tubman's legacy stories is that when she took her freedom, she went back to free others. She became one of those ladies all dressed in white who would help pull those over who dared to fly to freedom.

Along the way, there were those who decided at some point along the journey that the cost of freedom was too high. The fear of the flight to freedom became too great. They would rather turn back to the plantation life of slavery. Well, somebody should have told them about our ancestor Tubman. As one of the original conductors of the Underground Railroad, the passage on her train was a one-way ticket. No stop overs and no return tickets.

This was reasonable. Slaveholders treated slaves as commodities, promoting childbearing to increase their property interests. These same slavers would have no remorse on a returned slave when it came to torturing the freedom route right out of him. The brutality that such a slave would undergo is beyond our modern capacity to imagine. Tubman could not take the chance of having slavers on her track. You either continue towards freedom or you die.

Don't Look Back - But Do Reach Back

A fugitive girl in her twenties ventured from the only home she knew hoping to find freedom. When Harriet Tubman left the slave state of Maryland during September 1849, she was a married woman who had to leave her own husband behind because he did not share her dream of freedom. She made a treacherous journey that required a mighty nerve and resourcefulness, especially for a woman. In the night, led by the North Star, she did not know when the sound of bloodhounds were aimed for her or others. She would have to depend on all the teachings of her people to navigate through unknown lands.


When Tubman arrived in the free North, southeastern Pennsylvania, most of Delaware and northeastern Maryland contained the largest concentration of free Africans in the nation. By 1850, more Africans resided in these three states than free Africans in all other states combined. Tubman sought refuge in Philadelphia where liberties among Black Philadephians were quite striking in terms of mobility and economic opportunity.

When compared to her former Maryland home, free Africans had their own institutions: churches and charities, building and loan collectives, insurance and burial societies, separate branches of the Masons and other learned society groups. Soon, as the number of Africans grew, along with their prosperity, Northern cities like Philadelphia began enacting an increasing number of Fugitive Slave Laws, Bloodhound Laws and Slave Codes to manage the growing anxiety that this prosperity created among the European populations.

Despite these challenges, Harriet Tubman found employment in the North and became self supporting. Why would Tubman go back into the slave territories to free others in the early 1850s? Fugitives spent major resources evading the possible sight of slavers who had also built clandestine channels aimed at recovering the bodies of Africans they believed belonged to them.

Tubman had secured work in the North. She had freedom of mobility and lived in a big city with many comforts like many of us today. There is no way to truly know what convinced Tubman, a woman with a bounty over her head, that she herself must go back into the slavers territory to help rescue others. It may have come first from her love for her family. Biographers report that her first mission was to bring her niece, Kizzy, and Kizzy's off-springs out of slavery. The word was that they were scheduled to appear before a slaver's auction block.

Looking back, how many of us would go back? Does Sankofa just symbolize looking back at history with the comfort of a perceived distance, or does it mean looking back to see better what's going on right now? In today's world, with all its ills, who would be a change agent for a more peaceful and free society? How many are willing to risk their own freedom to help another gain freedom? How many are grappling with their own personal freedom choices in today's world? The legacy of Harriet Tubman is powerful and has much to teach us today.
Email ThisBlogThis!Share to TwitterShare to FacebookShare to Pinterest