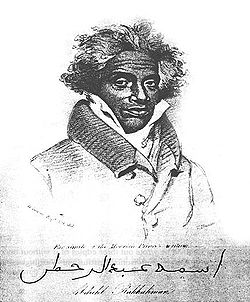 
In 1762, Abd al Rahman Ibrahima Ibn Sori was born within a royal family, son of King Sori, in the village of Timbo in what is today known as the Republic of Guinea in the region of Fouta Djallon (aka Futa Jalon, lit. "the land of the Fulbe and Jalunke"). Ibrahima was born among the Fulbe (aka Fulani, Fula, Fullah, Foulah; singular: Poulas, Peul, Pullo) of the Timbo region. The Fulbe were primarily muslim cattle herders in this West African mountainous region where the Niger river rises and runs eastward. In fact, Guinea's mountains are the source of the Niger, Gambia and Senegal rivers, with its highest point at Mount Nimba.

Today the cool, mountainous Futa Jallon region runs roughly
north-south through the middle of the Republic of Guinea.

According to the book Prince Among Slaves, written by Professor Terry Alford, the non-muslim Jalunke was the majority tribal group within the Futa Jallon region in Guinea where Ibrahima was born. According to Prof. Alford, conflict within the ethnically pluralistic Fulbe-Jalunke society occurred when the Jalunke leadership announced a declaration forbidding public prayer. Karamoko Alfa, the leading Fulbe cleric, declared jihad against the Jalunke for what was deemed a direct affront to Islam. A ceremonial slashing open of the Fulbe farmer's drums marked the beginning of this great West African war.

From Futa Djallon to the Mississippi Delta

By 1788, at the age of 26, Ibrahima was a military leader within the Fulbe army when he was reportedly ambushed, captured and sold to slave traders. Ibrahima was shipped to the United States where he was eventually sold to a Natchez, Mississippi slave trader by the name of Thomas Foster. Ibrahima's knowledge of agriculture operations and his leadership skills made him a central figure on Foster's cotton plantation. By 1794, Ibrahima married Isabella, also enslaved on the Foster plantation and would have five sons and four daughters.

As the story goes, one day Ibrahima was recognized by an Irish surgeon, Dr. John Cox, who had traveled to Timbo during his shipping ventures with an English ship. Cox was aided by Ibrahima's family for six months when he was stranded and fell ill in the Futa Jallon region. Cox asked Foster to sell Ibrahima to him so that he could free him for return to his West African homeland. Mr. Foster refused. Cox petitioned vigorously on Ibrahima's behalf until his dead in 1816.

In 1826, a letter Ibrahima wrote in Arabic addressed to his family in West Africa was picked up by Andrew Marschalk, a local newsman who sent a copy to the federal capital in Washington D.C., to the attention of U.S. Senator Thomas Reed. Reed forwarded the correspondence to the U.S. Consulate in Morocco, assuming that Ibrahima was a Moor. Though Ibrahima was not a Moroccan citizen, Sultan of Morocco Abderrahmane was touched by his story and petitioned U.S. President John Quincy Adams to release Ibrahima from the institution of slavery.

The Prince Among Slaves Returns to West Africa

In 1828, Henry Clay, then U.S. Secretary of State, interceded on behalf of "The Prince", the name given Ibrahima by Natchez, Mississippi residents. Foster stipulated that he would grant Ibrahima's legal release from slavery only if he left without his family and returned to Africa. Despite the Ibrahimas' public speaking efforts to raise enough money to purchase freedom for their nine children before leaving for Africa, they raised only half of the money Foster required for the purchase.

At age 66, after 40 years in slavery, Ibrahima sailed to Monrovia, Liberia in 1828. By July 1, 1829, a caravan was reportedly en route to Liberia, carrying family members from his Futa homeland. Ibrahima caught a fever and died at the age of 67, never making it to his native village in the Futa Jallon. He died July 6, 1829. His wife Isabella was reunited with two sons and their families whose freedom and transport was financed by the Ibrahima's funds. The remaining family in Mississippi was inherited by Foster's heirs and scattered across the South before further efforts could be made on their behalf. To his legacy, Ibrahima left behind the narrative of his full story, a rare gem within the legacy of the early colonial history of Africans in America.