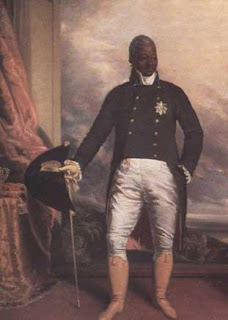 Little is known about Henri Christophe's (English: Henry Christopher ) boyhood. A great number of commentators report that he was born on Grenada island, a small nation in the Caribbean’s Lesser Antilles, and was the son of a freeman. His father, also named Christophe, was reportedly transported from West African or Central West Africa to Saint Domingue, the former French colony now known as Haiti.

In 1779, Christophe served with the French Forces as a drummer boy with a regiment described as gens de couleur (English: people of color or color people) in the American Revolution. The gens de couleur regiment fought at the Siege of Savannah at what is now the State of Georgia. Nine years later, in 1788, Georgia would become the fourth State admitted into the original thirteen colonies of the United States of America. France had lent troop assistance to the revolutionaries against England during the American Revolution.

After the American Revolution, Christophe returned to Saint Domingue where he is reported to have worked as a billiard-maker, mason, sailor, stable-hand and waiter. He also managed a hotel restaurant in Cap-Français, then the capital of Saint-Domingue, that served the wealthy French slave-holders from the surrounding plantations. 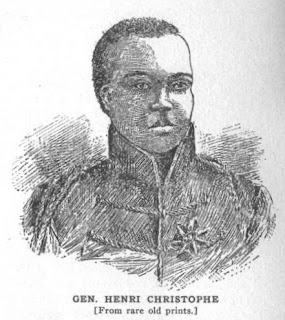 
On August 22, 1791, at Midnight, the Africans at Saint Domingue revolted against France's colonial regime of slavery. That night, approximately 1,400 coffee and sugar plantations were set on fire -- the first act that started the road to independence. The Haitian Revolution was rebellion against a century of French oppression. The name the Africans would later adopt for their new nation is "Haiti", a word translated from the language of the native inhabitants as "land of mountains".

Christophe fought alongside L'Ouverture in the north against the French. This included fighting against Spanish, British and French troops, all of whom had a strong interest in suppressing an uprising on the vast slave plantations established by the European colonialists over the Americas and the Caribbean.

By June 1802, L'Ouverture was captured by agents of Napoleon Bonaparte for France. He was deported from the island to France. The revolution continued, however. After 13 years of military battle between the French colony, the Africans would win their independence in the year 1804. January 1, 1804 -- to be exact. The Haitians distinguished themselves in history as the first independent Black republic in the West.

Christophe was elected president and served in that capacity from 1807 to 1811. On March 26, 1811, Henri proclaimed Haiti a republic nation and himself King, securing the title of Henri I -- first and only king of Haiti. He served as Haiti's king from 1811 to 1820, later becoming president in the last four years of his leadership.

Aerial Image of La Citadelle La Ferriere in Haiti. A legacy of King Henri Christophe I of Haiti was built between 1805 and 1820.

Henri Christophe is noted for his policy of construction and economic development in Haiti. Christophe was charged with transforming a slave-based economy into an effective and productive economy of a nation of newly freed people. While he improved the nations' infrastructure he is noted by some of the commentators for his labor policies which involved harsh work conditions and a transfer of a great amount of the wealth being controlled by the republic. 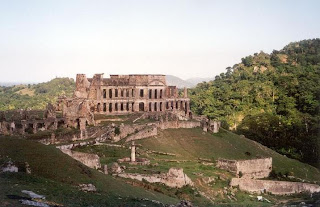 Photo of the Palace of Sans Souci in Haiti, commissioned by Henri Christophe in 1810 and completed in 1813.

By 1820, an insurrection broke out in the northern region of Haiti, where Christophe has retired to during the last four years of his rule. While some commentators allege that Christophe committed suicide, we do know from historical accounts that he suffered an incapacitating stroke right before he shot himself. A military strategists to the end. 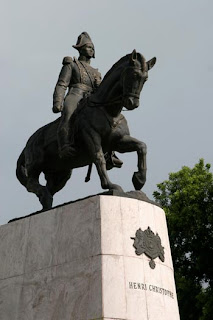 Statue of Christophe Henri, King Henri I of Haiti, at Champs de Mars in Port-au-Prince

Today, Christophe is revered as a hero among the Haitians and many within the African diaspora. Christophe's statue was raised at Champs de Mars in Port-au-Prince.
Email ThisBlogThis!Share to TwitterShare to FacebookShare to Pinterest