Charles Houston owed much of his early success to his remarkably dedicated parents. He was born on September 3, 1895. His mother was Mary Hamilton Houston a stylist (seamstress and hairdresser) to Washington D.C. politicians. His father was William Le Pre Houston, a general practice attorney for more than four decades in D.C. who also taught law practice management tat Howard University's law school. 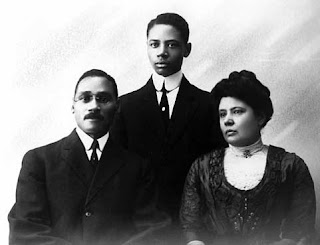 Photo of Charles Hamilton Houston (center) with his mother and father

Houston graduated from high school at 15 years old. In 1915, he was one of six valedictorians graduating from Amherst College in Massachusetts. He was also the only black student in his class. By 1917, Houston started teaching "Negro Literature" and English at Howard University in D.C., the same year the U.S. government entered World War I. Houston enlisted in the war in 1919 as a second lieutenant in field artillery where he served in France. 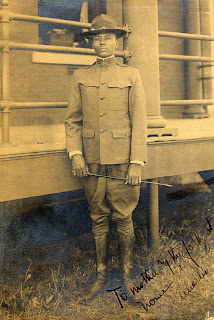 Houston understood racism and its impact on African Americans. As an U.S. officer in France, Houston endured the double fight of the black U.S. soldiers in Europe. Black soldiers fought on two fronts against both Nazi aggression and white racist aggression that was a great part of military life.

After an honorable discharge from the military, Houston returned to D.C. He applied to Harvard Law School and was accepted. He graduated in 1922 with a Bachelor of Laws. By 1923, he had earned a doctorate, distinguished himself as a scholar at Harvard where he became the first black editor of the Harvard Law Review.

In 1924, after his return from studying at the University of Madrid, Houston joined his father's D.C. law firm. In addition to starting a civil rights law practice, in 1924 Houston began teaching at Howard University School of Law, then a part-time night school.

Hamilton believed that a lawyer was "either a social engineer or a parasite on society" and saw his role as a legal educator as part of his social responsibility. By 1929, Howard University had developed into a full-time law school under his encouragement and was the training ground for about a quarter of the nation's black law students.

Houston's Legal Attack on the "Separate But Equal" Doctrine

As a constitutional scholar, Houston knew that the "separate but equal" doctrine accepted by the U.S. Supreme Court in the landmark case of Plessy v. Ferguson, 163 U.S. 537 (1896) was contrary to the rule of law. In 1934, Houston became special counsel with the National Association for the Advancement of Colored People's (NAACP). He surrounded himself with a select group of young lawyers, many of his aforementioned former Howard Law School students. Houston soon became "senior counsel" to the young legal strategists that would end legalized racial segregation in the United States.


As the NAACP's special counsel, Houston traveled throughout the U.S. South with a camera and a typewriter. He and his team of lawyers recorded conditions at public facilities for blacks and whites, reasoning that segregationist states were not even meeting the Plessy "separate but equal" standard.

By 1935, Charles Hamilton Houston and Thurgood Marshall prevailed in Murray v. Pearson, 182 A. 590, 169 Md. 478, 103 A.L.R. 706  (1936), a Maryland Court of Appeals decision where the black plaintiff challenged his denied entry into the then segregated University of Maryland law school. Legal counsel for the university argued that their client's met the separate but equal requirement when it granted qualified black applicants scholarships to enroll in law schools out-of-state.

The Maryland state courts rejected this argument, holding that Maryland’s out-of-state option was not an equal opportunity for law students who wanted to practice law in Maryland as Maryland lawyers. In 1936, the law school was ordered to admit qualified black students. Thurgood Marshall was among the previously qualified students denied entry into the Maryland law school, making the legal victory an especially sweet one for the Houston legal team.


In 1939, another of Houston's important civil rights cases was ruled upon in State of Missouri ex rel. Gaines v. Canada, 305 U.S. 337 (1938).  In Gaines, the reasoning in the Pearson state case was adopted by the U.S. Supreme Court and applied nationwide. In essence, the Court held that Missouri law school faculty's unique curriculum made "separate but equal" unattainable in legal education.

Houston on the Role of Lawyers as Social Engineers

According to Houston, "[the] Negro lawyer must be trained as a social engineer and group interpreter. Due to the Negro's social and political condition . . . the Negro lawyer must be prepared to anticipate, guide and interpret his group advancement. . . . [Moreover, he must act as] business advisor . . . for the protection of the scattered resources possessed or controlled by the group. . . . He must provide more ways and means for holding within the group the income now flowing through it," wrote Charles Hamilton Houston in his "Personal Observations on the Summary of Studies in Legal Education as Applied to the Howard University School of Law," (May 28, 1929).


In 1940, ill health led Houston to retire from the NAACP as special counsel. On April 22, 1950, Houston died, four years after the U.S. Supreme Court's 1954 ruling in Brown v. Board of Education. In 1950, the NAACP posthumously awarded him the Spingarn Medal. In 1958, Howard University School of Law's main building was dedicated as Charles Hamilton Houston Hall.

"'A lawyer's either a social engineer or he's a parasite on society'. . . . A social engineer was a highly skilled, perceptive, sensitive lawyer who understood the Constitution of the United States and knew how to explore its uses in the solving of 'problems of . . . local communities' and in 'bettering conditions of the underprivileged citizens.'"

Thurgood Marshall is reported as having remarked that "[w]e owe it all to Charlie."
Email ThisBlogThis!Share to TwitterShare to FacebookShare to Pinterest