“I love to think of nature as an unlimited broadcasting station, through which God speaks to us every hour, if we will only tune in.” ~ George Washington Carver

The peanut butter packaged and sold by such American brands as Skippy was invented by Dr. George Washington Carver. In U.S. society, Carver is the first person of record to make oil out of the peanut. This is the same peanut oil that can be found on many grocery store shelves today. While many people know about these innovations, they do not know that Carver developed these inventions, as well as hundreds of other derivative products from the peanut, pecan, and sweet potato.


Dr. Carver works included the development of agricultural derived adhesives, gasoline fuel, shaving cream, shampoos, hand lotions, insecticide, glue, bleach, sugar, synthetic rubber, and other innovations from natural agricultural resources. He devoted his life to understanding nature and the alternative uses of a simple plant. He is reported to have extracted medicines from weeds and through the separation of fats, oils, gums, resins and sugars, he found over 300 new uses for the peanut alone. 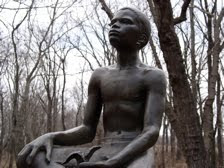 Photo of the George Washington Carver National Monument, a unit of the National Park Service located about two miles west of Diamond, Missouri. Depicting Dr. Carver as a young boy, this statute was founded on July 14, 1943 by Franklin Delano Roosevelt who dedicated $30,000 to the monument. It was the first national monument dedicated to an African-American and first to a non-President.

In 1864 (exact birth date unknown), George Washington Carver was born into the institution of slavery near Diamond Grove, Missouri. He was kidnapped from his mother by slavers as a baby. As a slave, his early weak condition in body made him of no use in the field. Carver worked in a domestic capacity and gardening became a part of his work. On the plantation he was known as the 'Plant Doctor." Despite the challenge of his birth, Carver applied and was admitted to Highland College in Highland, Kansas from his application submission that did not mention or request his race. When he arrived at Highland College its president, learning then of his skin color, withdrew the college's acceptance. 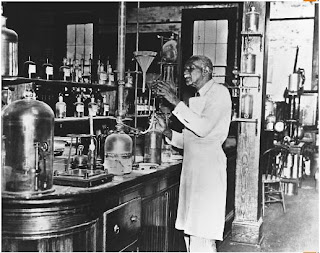 George Washington Carver in his laboratory.


At that point in his life, instead of college, Carver went into business. He opened a laundry and subsequently worked as a cook in Winterset, Iowa. Saving his money, Carver was the first person of African descent to be admitted to Simpson College in Iowa. He eventually transferred to Iowa Agricultural College (Iowa State College). There he earned a Bachelors and Masters of Science degrees in agricultural and bacterial botany. Carver became the first black teacher at Iowa State College.


Upon the invite of Booker T. Washington, Dr. Carver relocated to Alabama's Tuskegee Normal and Industrial Institute (Tuskegee Institute, now known as Tuskegee University). At Tuskegee, Carver spearheaded the university's Agricultural Department, a dynamic agricultural research department that he served for more than 50 years. There was much farming innovation developed out of Tuskegee during the course of Carver's leadership. This included translating scientific theory into great practical assistance to local farmers, including former slaves, who sought self-sufficiency through farming. Carver assisted many southern farmers, black and white, in producing additional products from their staple crops in an effort to increase family farm income. 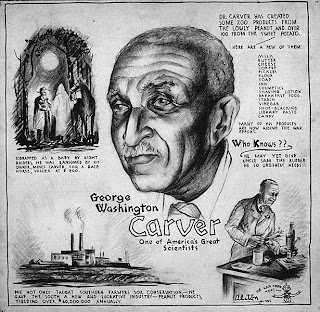 
Carver's work was a course in sustainable development. His legacy is the original green. This included providing American farmers training in soil fertilization and crop rotation innovations. He introduced southern farmers to new soil enriching plants such as the peanut, pecan, and the sweet potatoe. This diversified the agricultural tradition of farmers in the U.S. southern states whose agricultural economy was based predominantly on cotton production. Carver's work in agricultural recycling is significant in that he introduced southern farmers to practical innovative uses for farm waste. Tuskegee Institute research during this time included scientific works in chemistry, nutrition, plant pathology, and genetics.

“Reading about nature is fine, but if a person walks in the woods and listens carefully, he can learn more than what is in books, for they speak with the voice of God.” ~ George Washington Carver

“All mankind are the beneficiaries of his discoveries in the field of agricultural chemistry," stated the late U.S. President Franklin T. Roosevelt. "The things which he achieved in the face of early handicaps will for all time afford an inspiring example to youth everywhere." 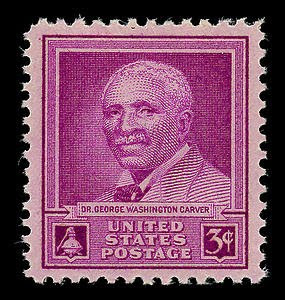 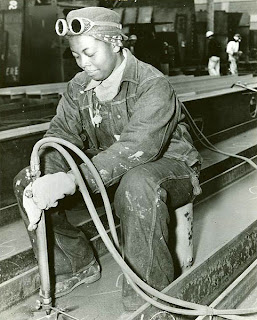 An African American worker at the Richmond Shipyards, Richmond, California, USA (April 1943) rushing the SS George Washington Carver ship to completion. Black skilled workers played an important part in the construction of the SS George Washington Carver, the second Liberty Ship named for a person of African descent, in the Richmond Shipyard No. 1 of the Kaiser Company (California). 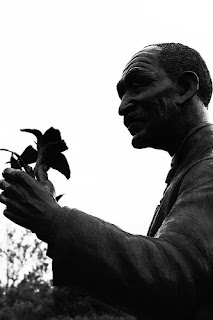 Statute of George Washington Carver
Email ThisBlogThis!Share to TwitterShare to FacebookShare to Pinterest