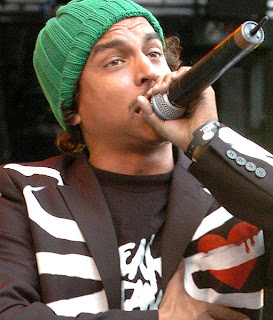 Timbuktu: The Musician
Jason Michael Robinson Diakité's stage name is Timbuktu, after the west African ancient city. He is a prolific young Scandinavian rapper and reggae artist. Born in 1975 in Lund, Sweden of African-American and Swedish parents, Timbuktu started making music in the early 1990s. Influenced by his birth country of Sweden, as well as time spent in New York, and in Chile, he has released 8 culturally rich albums. He has won Grammy Awards in Sweden and Gold Record Awards in both Norway and Sweden.

"His music borrows from African rhythms, blues, folk and Jamaican sounds while it still retains an energy and a spontaneity quite unusual on the international hip-hop scene," said Arnaud Danielou, writing for the Groovalizacion publication (09/27/09).

This is a great song (below)...I think. Most of his music is in Scanian Swedish, with some in English. An African Swedish rapper or the deconstruction of Babel. In either case, all is well. His videos are highly creative productions. Black history heroes -- whether in scholarship, business, politics, the sciences, or the arts -- always changing the game on a positive vibration.
Email ThisBlogThis!Share to TwitterShare to FacebookShare to Pinterest