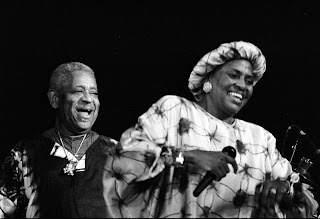 Miriam Makeba in concert with Dizzy Gillespie in 1991


Zenzile Miriam Makeba was born on March 4, 1932 in Johannesburg, South Africa to a Xhosa father and Swazi mother. The death of this famous South African singer and human rights activist was mourned the world over on November 10, 2008.

"I lived briefly at her house in Guinea back in the struggle days, she was a goddess; gave with all her heart - never really belonged to our country, she was just too big for that; she belonged to the world. No wonder they called her, Mama Afrika," said Tswagare Namane to Rashidi Runoko in describing Miriam Makeba.


She was raised under traditional African customs as her mother was a sangoma practitioner of herbal medicines and counseling within the Nguni tradition. The Grammy Award winning artist started her studies in Pretoria, South Africa at the Kilmerton Training Institute. In the 1950s she joined the Manhattan Brothers before starting The Skylarks group. Her music development became a blend of African jazz and traditional music. 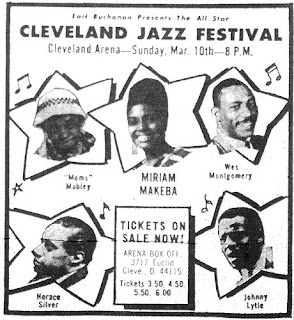 The opportunity to travel outside of South Africa arrived when she appeared in Lionel Rogosin's independent documentary "Come Back, Africa" in 1959. She traveled to London where she met Harry Belafonte who assisted her with entering into the United States, which is where many of her famous songs like "The Click Song" (Qongqothwane in Xhosa) and "Pata Pata" were originally recorded. Mariam Makeba had brief marriages to the musical legend Hugh Masekela and human rights activist Stokely Carmichael.

In 1974, Mama Africa performed in Zaire at the famous Muhammad Ali and George Foreman "Rumble in the Jungle" match. In 1990, after living in the U.S., West Africa, Nelson Mandela convinced her to return to South Africa to end her three-decade-long exile imposed by the apartheid-era South African government. Her spread of the beautiful music of southern Africa, her synthesis of the music of the African diaspora with her native music, as well as her resilence on the question of human treatment within socities, made her a Queen within the African struggle. She died at age 76 after a concert performance in Italy.
Email ThisBlogThis!Share to TwitterShare to FacebookShare to Pinterest