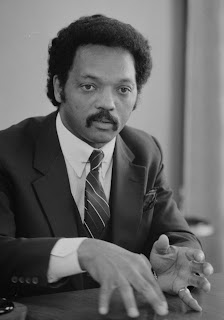 Photo: Rev. Jesse L. Jackson, Sr. (b. October 8, 1941)
On December 25, 1971, the young Jesse Jackson along with 70 other prominent Black leaders founded Operation PUSH, a social change organization headquartered in Chicago.
JACKSON STARTS OPERATION PUSH IN CHICAGO
Now with more than 70 affiliates across the nation, Operation PUSH focuses on Black political empowerment as well as encouraging increased connections between Blacks and American industry. The community organization has successfully negotiated agreements with large and small businesses across the nation to increase fair employment practices in hiring, promotions, franchising, and sub-contracting opportunities for all Americans. 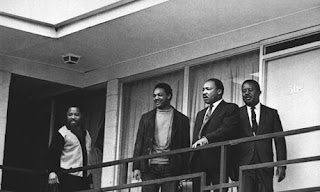 Photo: A young Jesse L. Jackson, Sr. with Martin Luther King, Jr.
and others on the balcony of the Lorraine Hotel in Memphis
Dr. Martin Luther King, Jr. encouraged the youthful Jackson to become a strong community activist in Chicago and in the nation. Jesse Jackson, Sr. launched his national political career from the Operation PUSH headquarters. The organization served as the base where Jackson launched his U.S. presidential campaigns in 1984 and 1988. 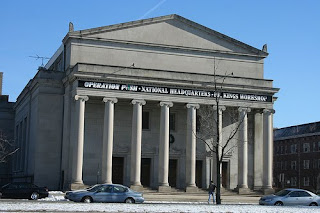 Photo: Operation Push National Headquarters
The national headquarters for Operation PUSH was built in 1923. It was originally built for the Kehilath Anshe Ma'arive (K.A.M.) congregation, the oldest Jewish congregation in Chicago. Rev. Jesse L. Jackson Sr. and other community organizers purchased the building in 1971. The Rainbow Coalition was founded by Jackson in 1985 and was housed in the building at 930 E. 50th Street.
Surrounding the Operation PUSH headquarters are older generation mansions lining Drexel Boulevard in the Bronzeville community of Chicago's South Side. In his classic work Native Son, writer Richard Wright chronicles the life of a young Black man from the community where the picturesque building stood.
Operation PUSH and the Rainbow Coalition was subsequently merged and renamed The Rainbow PUSH Coalition. It advocates in both U.S. civil rights and international human rights efforts. This historic building continues has served as a voter registration center and labor mediation site for many years.
Video: Congressman Jesse Jackson, Jr. (IL-2) continues his father's legacy
of political activism. Here he speaks in the Operation PUSH building in 2006
where he launched his political campaign for the Chicago Mayor post.
Email ThisBlogThis!Share to TwitterShare to FacebookShare to Pinterest