In 1850, the U.S. Congress passed a more severe Fugitive Slave Law which said that any white person with no more than a sworn witness could claim a Black person as his escaped slave and legally secure the individual to petition before a federal commissioner. In its swift reaction, Quinn Chapel passed a resolution stating “We who have tasted freedom are ready to exclaim, in the language of Patrick Henry: 'Give us liberty, or give us death.'” The congregation immediately mobilized its forces to watch for slave hunters. 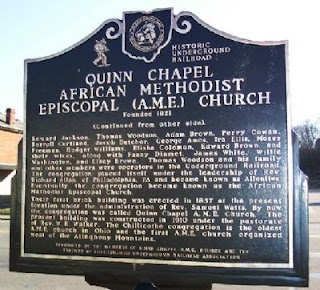 Quinn Chapel's pulpit has been graced with Black leaders such as Frederick Douglass, Booker T. Washington, and Dr. Martin Luther King, Jr. Quinn Chapel helped found the Bethel A.M.E. Church, Wabash Avenue YMCA, and Provident Hospital, the first Black-owned hospital in the nation. The current gray-stone brick building of this Black institution is designed in a Romanesque architectural style that was erected in 1892. It is on the National Register of Historic Places. The Quinn Chapel A.M.E. Church is located at 2401 S. Wabash Avenue in Chicago, Illinois. 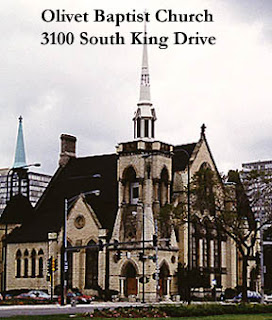 
Olivet Baptist Church is one of the oldest Baptist churches in Chicago. Founded April 6, 1850, this congregation was an active station on the Underground Railroad. Its pastor was a leading member of the Vigilance Committee which was organized to help runaway slaves and fight the Fugitive Slave Law.

By the 1920s, under the leadership of Lacy Kirk Williams, who became pastor of the church in 1915, Olivet Baptist Church became one of the most prominent Black churches in the nation. From 1915 to 1920, the church's membership more than doubled. Under the leadership of Williams, Olivet was not only a religious center but a community center. During this time, a full-time staff of 16 operated a program that included a labor bureau, nursery, kindergarten, a private welfare department, in addition to a community club house and athletic facilities. Olivet Baptist Church is located at 401 E. 31st Street in Chicago, Illinois.
Email ThisBlogThis!Share to TwitterShare to FacebookShare to Pinterest