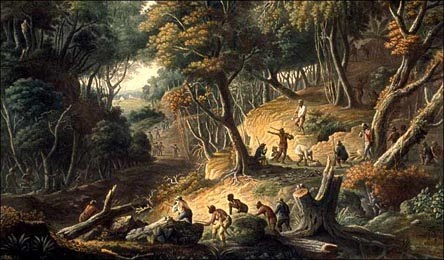 African Maroon or Black Maroon societies are historically known to have existed throughout the Americas: from the Carolina islands of the U.S. to the Florida peninsula of the United States, to the mountains of Jamaica into the Suriname (fka Dutch Guiana) jungles. Maroon communities also existed in Brazil and Mexico. The Maroons were enslaved Africans captured by European slavers for forced plantation work in the New World.

Through revolt, the enslaved African became fugitive slaves and banded into refugee African communities throughout the Americas and Caribbean, developing separate from European settlers. Among the oldest known Maroons were from the region now called Suriname in northeastern South America. African Maroon societies developed in Suriname as early as the 17th Century.

The historical documentary below was shot in what was then known as Dutch Guiana by James A. Fitzpatricks for TravelTalks: Voice of the Globe. It provides a snapshot of the life of a group of kidnapped and purchased West Africans who chose to flee Dutch plantation slavery in South America. A 1976 study by Richard Price states that there were six African Maroon groups in Suriname, dividing them into two main groups on the basis of cultural and linguistic differences, as well as location: (1) the Eastern Tribes, consisting of the Ndyuka (Aucaner, Awka), the Aluku (Aluku nenge, Boni), and the Paramaka (Paramacca); and (2) the Central Tribes, consisting of the Saramaka (Saramacca), the Matawai, and the Kwinti (cf. the tribal distribution map in Price 1976: 5). The Djuka and Saramaka are the largest African family groups. The Aluku, Matawai, and Paramaka are much smaller in number. The smallest tribe is the Kwinti, with fewer than 500 people.

Among the early anthropological field studies of New World African tribes were among the Djuka. In 1961, Dutch historians published substantial ethnographic resources. Additionally, general ethnographic research among the Saramaka family group was conducted by Richard and Sally Price in 1966-68, and briefly in 1974-75. 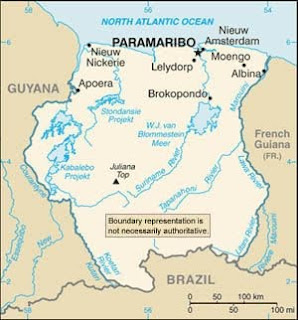 Map of Suriname in South America

For the most part, the Djuka live along the interior rivers Suriname. After a half century of guerrilla warfare against colonial and European troops, Maroons of Suriname signed treaties with the Dutch colonial government in the 1760s, enabling them to live independently. Some commentators state that the policy of autonomy has changed in the past few decades. The Djuka population increased markedly during the eighteenth and nineteenth centuries. Growing numbers are now living in and around Paramaribo, the capitol of Suriname, and they also seem to be expanding eastward into adjacent French Guiana. See also Journey Man Pictures' YouTube video documentary/commentary, Defending the Secret Slave State - Suriname.

For further reading about African Maroon cultures in the Americas:
Email ThisBlogThis!Share to TwitterShare to FacebookShare to Pinterest