Surinamese of African descent often had great expectations when moving to The Netherlands. These expectations were not always realized in the first or second generation. In De kleurling, Dutch-born author Herman Hennink Monkau writes of the experience of a first and second generation Suriname family in The Netherlands.
The change in weather was the first adjustment for early Surinamese immigrants to post-colonial Europe. Monkau gives special attention to the second adjustment felt by those early immigrants seeking paradise in The Netherlands: a Dutch-style racism targeted at immigrants of African-descent described by commentators as a sort of tragic comedy.
The novel's backdrop is a Jazz-infused Holland at the beginning of the 1930s. While the characters are mostly Surinamese and Dutch, Monkau manages to delicately interweave into the novel the 17th century slave history of Suriname's Joden Savanna (jodensavanne or Jewish Savanna)-- transplanted Portuguese Jewry from Brazil.
At this juncture the reader sees Suriname, a small country located along the northeast coast of South America. Sharing a southern border with Brazil, in 1664, a large group of mainly Portuguese Jews migrated or were banished (depending on the historical account) from Brazil and started sugar-cane plantations at Joden Savanna, Suriname.
Three years later, in 1667, the Dutch swapped/traded New Amsterdam (known now as New York in the USA) with the English territory of Suriname. Nearly two hundred years later, in 1863, slavery was abolished in Suriname. Migration of native Surinamese to the former Dutch colony in Europe followed in the subsequent years after independence from The Netherlands - hence De kleurling. 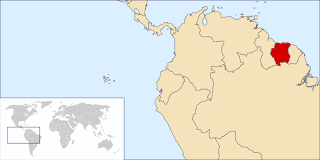 Location of Suriname in South America

About the Author:
Herman Hennink Monkau was born in Amsterdam. His father is native to Suriname and his mother is Dutch. In 1975, Monkau traveled to his father's native Suriname were he successfully practiced civil engineering drafting in Paramaribo and wrote as a journalist under the pseudonym “Bakra” from the region. His columns were published in the Het Parool publication between 1983 to 1986.
Monkau moved from Suriname to the California region of the United States for a time before moving to Italy. Long since moving back to his birth city of Amsterdam, Monkau published De kleurling in August 2006. It was published through the Prometheus book publishers in the Dutch language. The english speaking world is waiting on a translation.
Monkau is best known professionally as an industrial designer who has worked out of Amsterdam, Paris, Frankfurt, Cosenza (Italy), and Los Angeles. After last speaking with Monkau in Amsterdam, he stated that his most recent writing project is a biography of the Suriname-born black inventor Jan Ernst Matzelinger.
Email ThisBlogThis!Share to TwitterShare to FacebookShare to Pinterest