THE DOGON: From the Nile Valley of East Africa to the Kingdom of Mali in West Africa

The Dogon, an ancient people in Africa, are mainly populated in the modern nations of Mali and Burkino Faso in West Africa, the epicenter of the historical medieval Mali Empire. When western anthropologists first began to study Dogon culture they were baffled at the group's advanced knowledge of the universe. They were specifically astonished at their intricate understanding of the Sirius planetary system (Alpha Canis Majoris).


Historical commentators believe that the Dogon's cosmological lore goes back thousands of years to at least 3200 BC, during the pre-dynastic age of ancient Egypt, of the Kemet-Nubian family group of the Nile Valley region. Is it only a coincident that the Dogon's oral history includes an eastern migration story prior to their settling in the Bandiagara Plateau region, near the Southern edge of the Sahara desert between the 13th and 16th centuries? 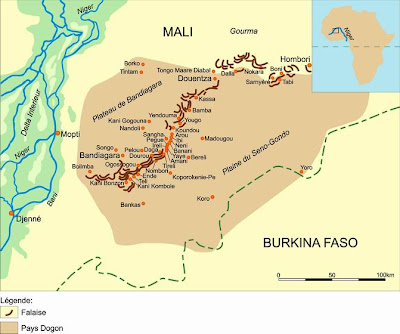 According to French anthropologist Marcel Graiule, author of Conversations With Ogotemmeli, Dogon priests have kept a precise reading of the ebbs and flow of Canis Major planetary bodies. Sigi Tolo is the name the Dogon give to the distant star Sirius, also referred to as Sirius A. Po Tolo is the name given to its smaller companion star, Sirius B. Keeping and tracking cosmological and astronomical knowledge is part of every aspect of the Dogon's communal lives. In the 1960s, when Graiule studied the Dogon, he found a social order void of murder and theft. It included an elder mediation process that resolved the disputes that arose within Dogon communities -- addressing such issues as who has liability for damages when a man's goat destroys property belonging to his neighbor.

For thousands of years, Dogon social and cultural systems were designed to recall and trek planetary bodies that have been subsequently verified as correct mapping. The Dogon gained this knowledge without the use of physical telescopes. From documentary footage about the Dogon, it appears that they dwell among the cliffs and use the peaks of mountain and hill tops to anchor and measure planetary movements, aided by our pattern of rotation around the sun.


For the Dogon, patterns and symbols related to planetary knowledge is embedded in rituals, architecture, sand drawings, etc. The Dogon are aware that Po Tolo (Sirius B) has a 50-year elliptical orbit around the super dense Sigi Tolo (Sirius A).  Knowledge of Sirius B was not discovered by western astronomers until 1970 when photographed by Irving Lindenblad of the U.S. Naval Observatory.

The Nile Valley and the Sirius Connection


The Kemet story of Osiris and Isis were developed and recalled by other Nile valley civilizations such as Nubia and Kush -- all of which identify the Sirius constellation system as the dog star (Canis Major), a manifestation of Anubu (aka Upuaut or "Opener of the Ways"; Greek: Anubis). In Nile valley creation stories, Anubu is a central actor. He is probably best known for his role in the battle between the brothers Set and Osiris.

When Set disassembles the body of his brother Osiris, Isis reassembles the body pieces and delivers them to Anubu who performs embalming rites that bring Osiris back to life. Anubu is also associated with Osiris as his son -- making him the brother of Horus (hour/time).

Anubu is also known among Nile valley civilizations as the one who protects and guides the spirits of the dead across the waters (Nun) of the underworld (Duat or the Hall of Two Truths). Anubu reigned over the process of mummification and embalming, leading the souls of the dead to the Hall of Two Truths for the declaration of the 42 Laws of Maat and the weighing of the heart by the goddess of law and justice, Ma'at.


The Dogon's creation story has its origin on Po Tolo (Sirius B). According to the Dogon, Nommo came from the Sirius star system, which is some 8.7 light years away but still bright in our night sky. According to the creation story, the Nommo traveled to Earth by ark and, upon arrival, morphed into the eight mythical human ancestors -- 4 male and 4 female (See also Tehuti (aka Thoth), Ogdoad, Rebirth, Golden Age). Over time, the first human ancestors mated and birthed all of humanity. Even today, the Dogon pray to Nommo for rain, a prayer they say was taught to them by the Nommo. The Dogon rain dance is similar to that of the Native American and involves raising of hands, chanting and making offerings.
Email ThisBlogThis!Share to TwitterShare to FacebookShare to Pinterest